This week’s fake news profile is on Sweden. Misinformation is endemic in Sweden due to foreign state produced content and in recent years the Swedish security service have increased their efforts to stop its spread.

In 2016, the Swedish security service Säkerhetspolisen (Säpo for short) published a report on Russian produced propaganda in Sweden. It discussed the “combined informational and psychological approach by Russia’s government that blurs the classic distinction between war and peace” (Piotrowski, 2016).

Following the open publication of the unclassified report, a series of widespread DDoS (distributed denial of service) took place, temporarily disabling seven of Sweden’s most read newspaper’s websites. Before the attacks, which were thought to be coordinated between Swedish civilians and Russian officials, the tweet pictured below was anonymously posted, leading to the security services investigating its origins.

The attacks which were thought to be coordinated between Swedish civilians and Russian officials were seen as retaliation for Säpo labelling Sputnik and RT as peddlers of anti-Sweden propaganda. Sebastian Åsberg of the Swedish Institute of International Affairs (Utrikespolitiska institut) describes this interference as “a coordinated influence campaign against Sweden”. 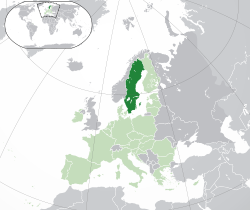 Sweden is not a member of NATO but “actively cooperate[s] in peace and security operations and have developed practical cooperation in many other areas including education and training, and defence reform” (NATO, 2018). Geographically, Sweden is the West’s gateway to Russia.

Swedish Sputnik produced negative articles about NATO such as false claims that a parliamentary vote on the NATO host country agreement would mean Sweden storing NATO nuclear weapons. These stories reached several politicians who wrote op-eds voicing objection to the fake proposals. The reason for these fake stories was to create negativity about NATO to weaken their presence in the Baltic region. Forged letters and documents bearing officials’ signatures also claimed the minster of defence exported artillery to Ukraine and ministers supporting ISIS in Iraq.

David Lindahl, a research engineer at the Swedish Defence Research Agency, says Sweden has been naïve with security as they occupy a peaceful part of the world and face very few physical threats. Lindahl claims Sweden became complacent and were then a victim of their own peace. However, it is not just foreign state interference that plagues Sweden, but also right wing and Islamic radicalisation online. These stories aim to create division and stoke tensions within Sweden, a pattern seen across the western world.

The stories prey on pre-existing prejudices and spread rapidly across social media. For example, in 2016 the story that a group of Muslims had vandalised a church was spread by bots based outside Sweden across Twitter. The original articles by Mad World News and Kristianstadbladet remain unproven.

As many people will remember, in February 2017 the newly elected @POTUS told a crowd “You look at what’s happening last night in Sweden” referring to a supposed migrant caused incident that never happened. However, there was more to this than Trump simply making a mistake.

Fake news has created anti-Muslim sentiment in Sweden and has “created a narrative that Sweden is the “rape capital of the world,” is in the throes of a cultural civil war, and that there are areas of the country so dangerous that even police don’t dare enter.” (Mast, 2018). These stories have been perpetuated by American fake news organisations which led to Trump addressing the so-called ‘Muslim crime wave’. Just last week in the UK, a fan page for the right wing politician Jacob Rees-Mogg referred Sweden’s ‘Muslim crisis’ posting the following:

To counter the spread of fake news, Sweden has turned to education as well as general digital literacy improvement. The Swedish government plans to introduce fake news curricula in schools and in recent years there has also been a rise in fact-checking organisations.

However, the biggest public player in the curbing of fake news has been the security service itself. @SAPOsverige are very open for a national security service and release publicly accessible reports on misinformation and fake news. Famously, their first tweet was “We are on Twitter because of security. Follow us because we follow you”. The security service hopes that by being transparent they can earn the trust of their citizens and so better guide them to counteract fake news.

The agency has not been without its criticism, and in 2015 the agency made the decision not to reveal the ethnicity of suspect criminals. Why else this was an effort to prevent stereotyping and prejudice, the move was interpreted as a coverup of the alleged ‘Muslim crime wave’ rocking the country.

Finally to end this this week’s fake news profile are some examples of fake news, forged documents and propaganda in Sweden. This headline from the UK Express claimed Stockholm has a ‘no-go zone’, a common claim in fake news stories targeting immigrants and Muslim people.

British MPs have also peddled similar claims based on anti-Muslim sentiment, and last year Nigel_Farage claimed that police in Sweden no longer investigate rape cases, a claim debunked by Snopes. 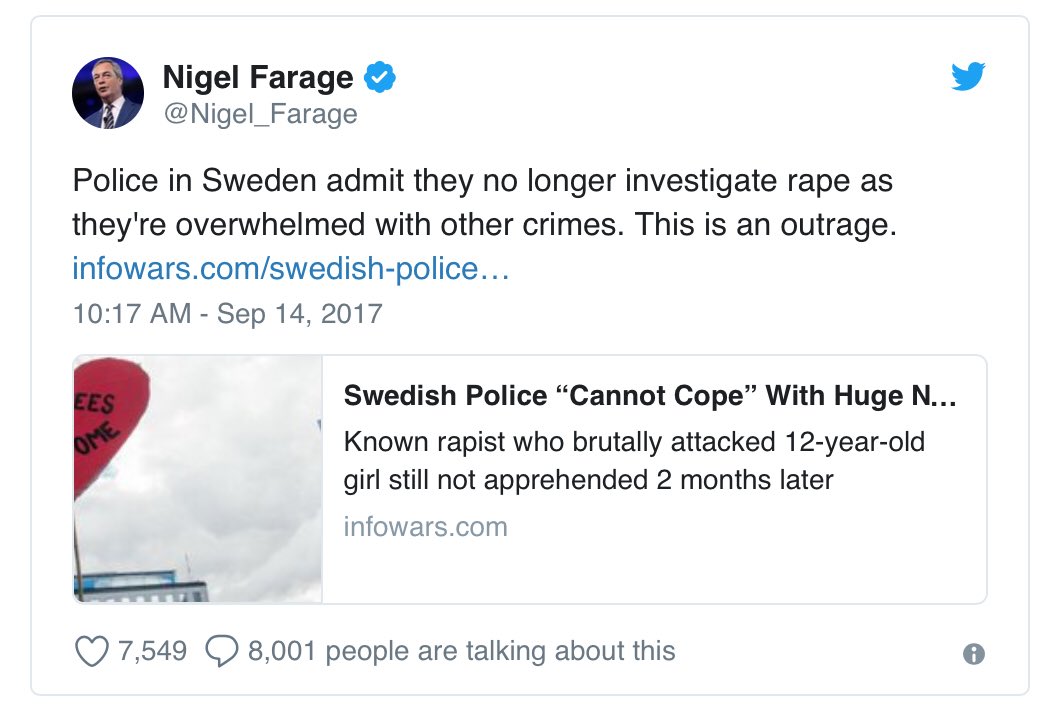