This claim is false and originates from a satirical article published on Facebook. This is backed up by the lack of evidence in Hobhouse’s expenses information on the Independent Parliamentary Standards Authority website and has been confirmed to be false by the office of  Wera Hobhouse MP.

Browsing through Facebook on Tuesday I saw this article shared by someone on my News Feed. The image from the group Brexit News showed the following:

The post, with the caption “Them and Us”, shows a photo of Bath Liberal Democrat MP Wera Hobhouse with the claim she spent £7,456 of public MP expenses money on vegan cheese. 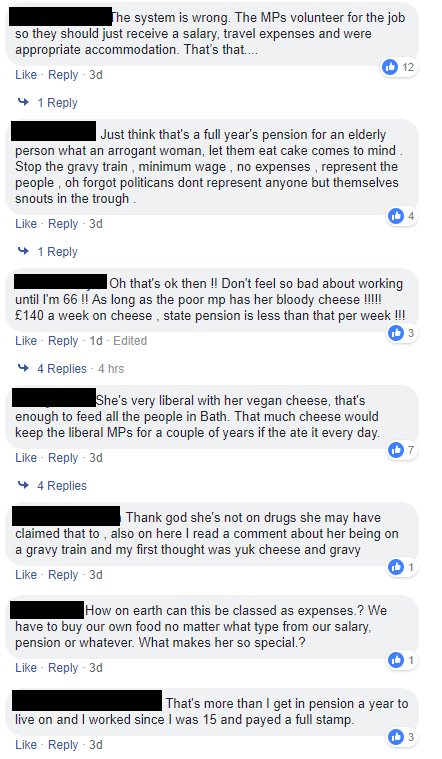 The image and rumour also appear on Twitter. All the tweets shown here are all directed at or replying to tweets directed at @Wera_Hobhouse, Hobhouse’s official Twitter account.

However, it is important to note there are also comments and tweets debunking the story:

The posts/tweets make reference to expenses forms, an original satirical article and also reference a high expense printer. These types of posts are also in the minority as the vast majority of posts taking the story as a truth and berate Hobhouse for the spending.

Today Is All About Bath or ‘TIAAB’ was a satirical news site based on Facebook. At its peak, the page had around 8,000 ‘likes’ and produced content such as “Rees Mogg banning ‘up-shorting'” and a previous story alleging former Bath MP Ben Howlet “claimed £7,456 expense last year for McVities Hob Nobs”. TIAAB self-identify as satire and their Facebook ‘About’ section reads “Satirical Bath page. 100% bullshit”.

Due to the controversy surrounding this image, TIAAB closed down on July 23rd.  Before their closure, TIAAB acknowledged in a final Facebook post this image was a joke that was misunderstood.

Despite being intended as satire, as the Facebook and Twitter shares show, many still believed the content and remain indignant even when the article’s satirical origins are pointed out to them by other social media users. This is why I decided to do a full fact check of the claim using multiple sources.

As a few had already done on Facebook and Twitter, I headed over to the Independent Parliamentary Standards Authority website to view Hobhouse’s expenses. Data downloaded from the website for the current period 17/18 showed no results for ‘vegan’, ‘cheese’ or even ‘food’. The three highest cost items are the following:

The third item down, which also received media attention from Somerset Live and Bath Live, seems to be the item that inspired the satirical story. Hobhouse responded with a full statement to the story justifying the controversy caused by cost of the printer.

This claim started off a satirical story that was then de-contextualised and shared rapidly across social media. The claim has been debunked by the original producers of the image Today Is All About Bath and the online news producer Somerset Live. A search of Hobhouse’s freely available MP’s expenses does not show the cost and Hobhouse’s office also refuted the story.

Insights from this fact check

Google, and other search engines, are a great tool in determining the veracity of a claim made on social media. As mentioned above, a quick four-word Google search retrieved the Somerset Live article explaining the image’s origins and that the claim wasn’t true. It’s a quick, free and easy way to fact check an article, image or rumour online.

This particular case also demonstrates how satirical and fake news preys on recent events. This story was inspired by Hobhouse’s printer expenses that received backlash from both the media and public in the Bath and North East Somerset (BaNes) area. People viewing the image may have previously seen and read about the controversy around the printer and therefore were more susceptible to fall for the fake story on Hobhouse’s expenses.

This case also illustrates the dangers of poorly executed satire. This satirical story is being treated as a factual statement and comments on the post largely believe the story. The image and the caption “Them and Us” is unduly perpetuating anti-MP and anti-political beliefs. The image is also damaging the reputation and character of an MP who in this case has not done anything wrong.